How to fit ceiling lights

As long as you can get to the ceiling void from above without too much hassle, it’s not complicated to move a light to wherever you really need it. Alternatively, you can boost your light levels by adding extra pendants which you operate either by the existing switch or with a new one.

Remember to switch off the mains power at the consumer unit.

Before starting any electrical work, stay safe – get yourself a socket tester (or voltage tester for lighting circuits). They confirm whether circuits are dead and safe to work on.

Check all finished work with a socket tester (or voltage tester for lighting circuits) before using.

For your safety, these products must be installed in accordance with local Building Regulations. If in any doubt, or where required by the law, hire a professional. Further information is available online or from your local authority.

Never take risks with electrical safety. Before you start any type of electrical work, follow these safety precautions:

Your first task is to find out what circuit type you have: junction box or loop-in. With the power turned off, remove your ceiling rose cover. You won’t be able to tell from the design of the rose – instead, you’ll need to count the cables entering it. If there’s only one cable then you have a junction-box wiring; if there are two or three, then you have a loop-in system. 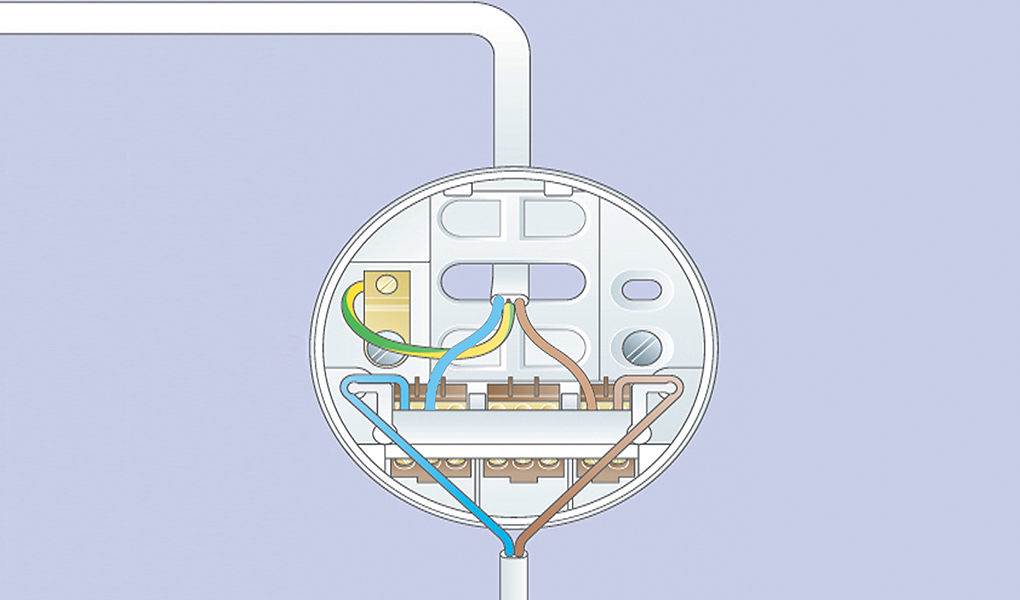 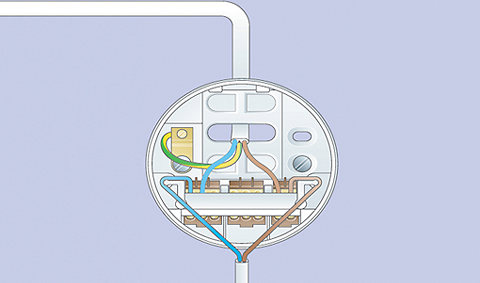 A single cable entering the rose 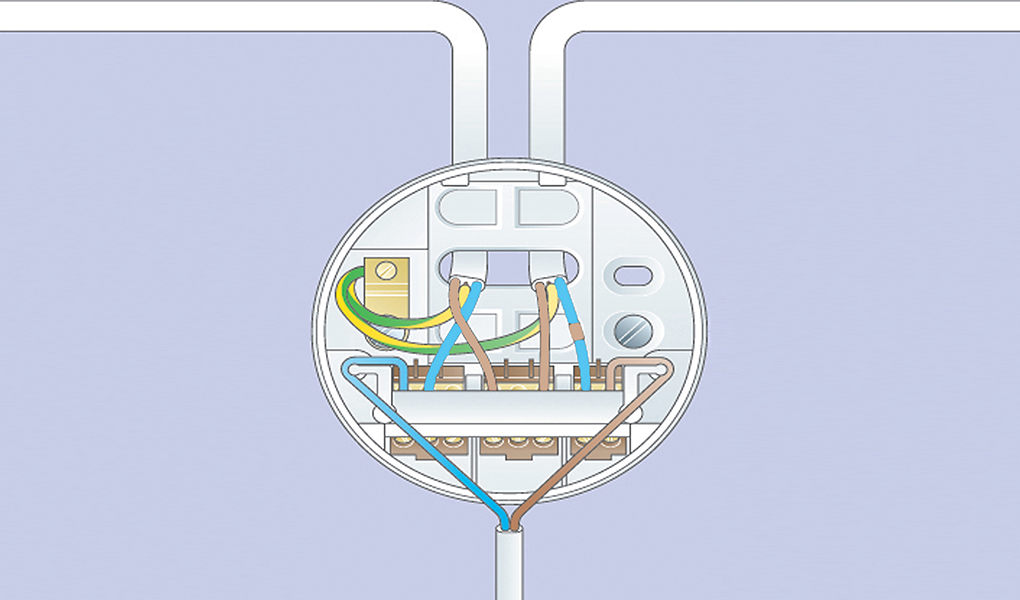 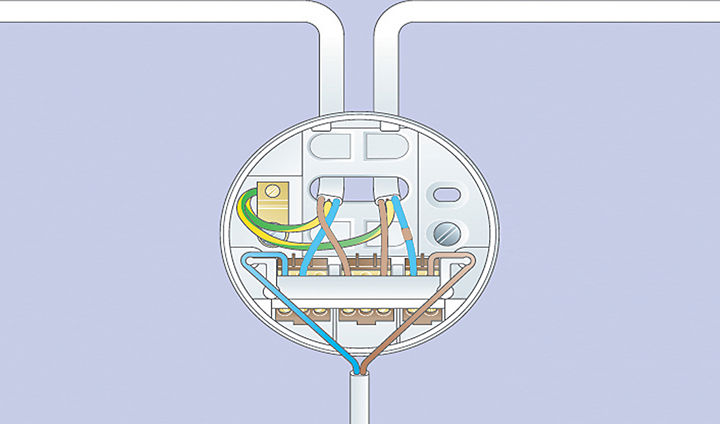 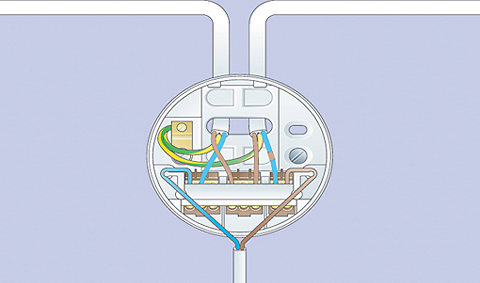 This indicates a loop-in circuit. The last rose on the circuit will have one circuit cable plus a switch cable. 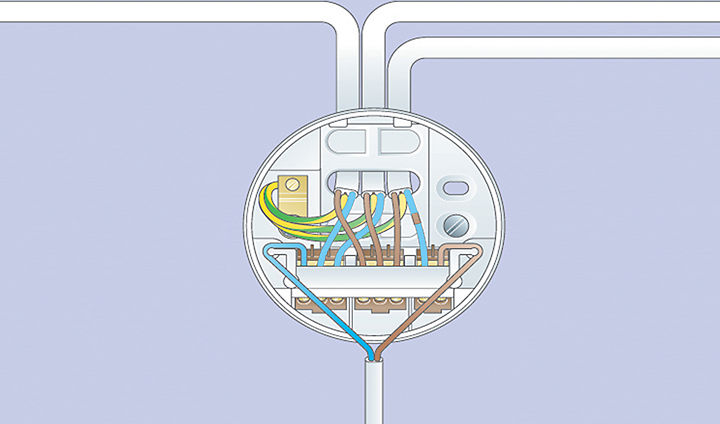 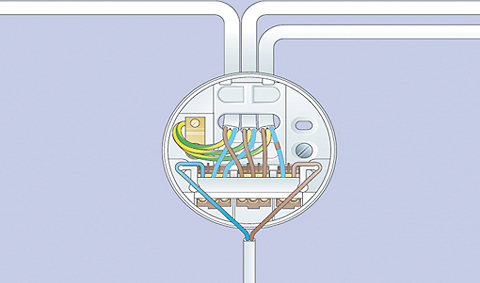 This indicates loop-in wiring; an intermediate rose on the circuit will have two circuit cables plus a switch cable.

Start by isolating the circuit, double-checking it’s dead and unscrewing the rose cover. When you’ve identified the type of wiring, disconnect the flex and feed cable.

Unscrew the rose base from the ceiling and push the cable back through. Above the ceiling, connect the cable to a three-terminal junction box. Then run a length of 1 mm² two-core-and-earth cable from your new light rose.

Connect the brown core to the live terminal, the blue to the neutral terminal and the earth (insulated with green / yellow sleeving) to the earth terminal. Repair the ceiling at the old light position with filler.

Unscrew the rose base from the ceiling and push the cables back through. Mount a four-terminal junction box above the original light position.

If a single pendant fitting isn’t giving you enough light, you can always add another controlled by the same switch without too much trouble. The one limiting factor is the number of lighting outlets already powered by the circuit – so don’t risk overloading it.

Flex can only support a very lightweight bulb and shade, so fittings over 2 kg must be supported by a chain. Fittings with metal parts must be earthed via three-core flex unless they’re labelled as double-insulated.

First, double check the circuit is dead. Then cut the feed cable to the original light at a suitable position to install a three-terminal junction box. Run a length of 1 mm² two-core-and-earth cable from there to the new fitting.

Double check the power is off. Then run a spur cable from the original ceiling rose. This connects its brown core to the same terminal as the switch drop blue core (which should carry a length of brown PVC sleeving to show it can be live) and its blue core to the neutral circuit cores. The earth core goes to the earth terminal. 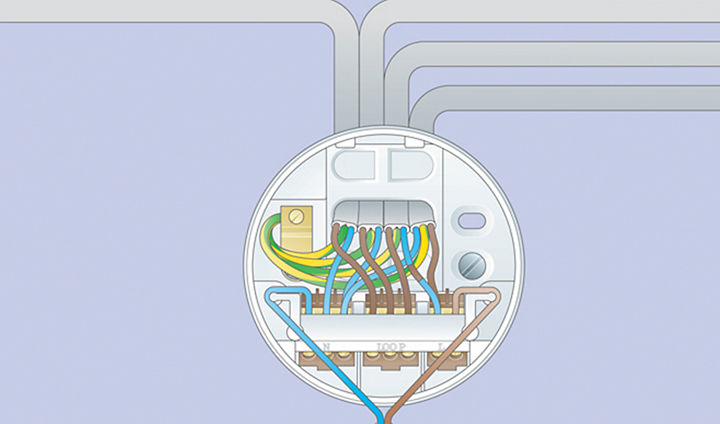 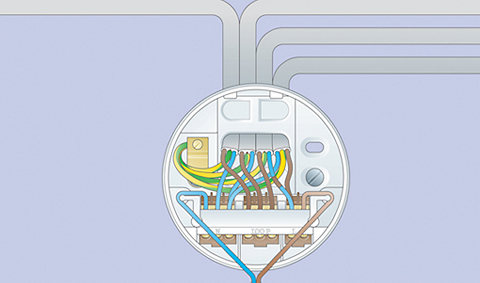 Running a spur from a loop-in rose

With a loop-in system, you can add a spur cable at the original ceiling rose to give power to a second light controlled by the same switch.

Whichever type of wiring you have, you may be able to run the switch cable back to the existing switch position. This replaces the original one-gang switch with a two-gang unit and gives you a neater installation.

Double check the circuit is dead, then cut the main circuit cable and install a four-terminal junction box. Connect the live cores of the split circuit cable to one terminal, the neutral cores to another and the earth cores to a third – adding green / yellow sleeving.

Next, run a length of 1 mm² two-core-and-earth cable to the new light, and another to the switch. Connect the brown switch core to the circuit lives, its earth to the circuit earths and its blue core to the fourth terminal. Then add a length of brown PVC electrical sleeving to this core to show it can be live.

Connect the brown core of the light cable to the switch drop’s blue core, its blue core to the circuit neutrals and its earth to the earth terminal.

At the new light position, connect its brown core to the central bank of terminals (which might be marked ‘loop’) and its blue core to the neutral terminal. Also, connect the earth to the earth terminal, adding green / yellow sleeving.

Run in the switch drop cable at the new rose, connecting its brown core to the spur’s brown, its blue core (flagged brown) to the live terminal and its earth to the earth terminal.

With either type of wiring, you’ve got an additional option. You could connect a three-terminal junction box into the main circuit cable and run a spur from there to a loop-in rose with its own switch cable. 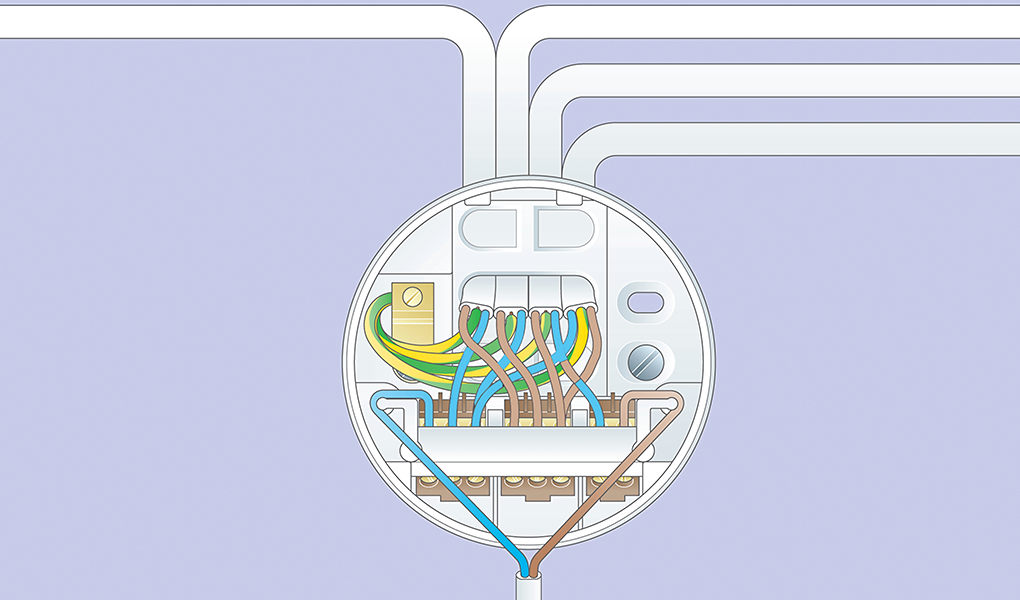 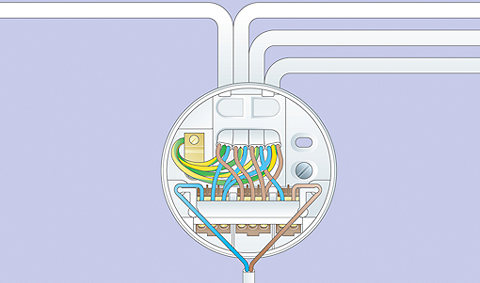 With a loop-in rose, you can add a spur cable to provide power to a second light position controlled by its own switch. 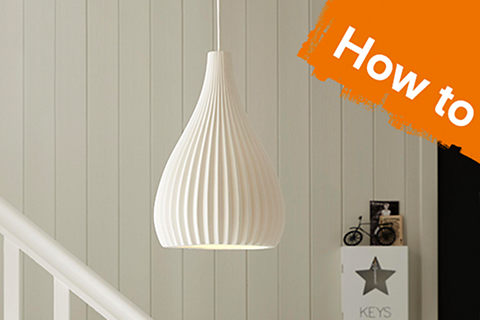 How to fit ceiling lights

As long as you can get to the ceiling void from above without too much hassle, it’s not complicated to move a light to wherever you really need it. 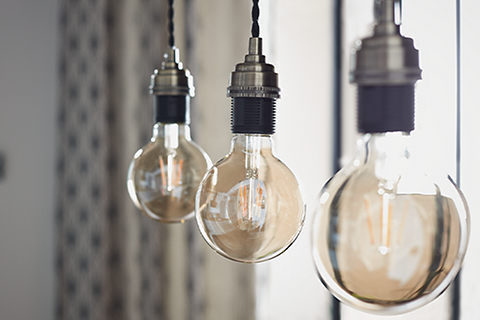 You get to choose the light in your room – whether it’s natural or artificial. You can be totally in control. 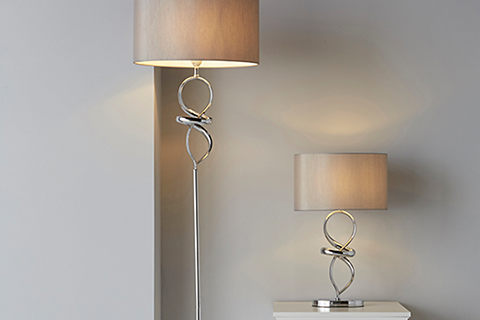 While you might miss the summer sun, winter brings its own special charm and having the right lighting can set the scene for this magical time of year. 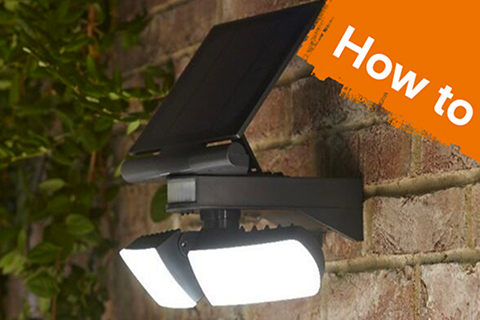 How to install a solar powered light

Solar powered floodlights can be a security feature but they can also illuminate garden paths, or make the most of your patio on long summer evenings.